How getting familiar with the command line can drastically improve your workflow. 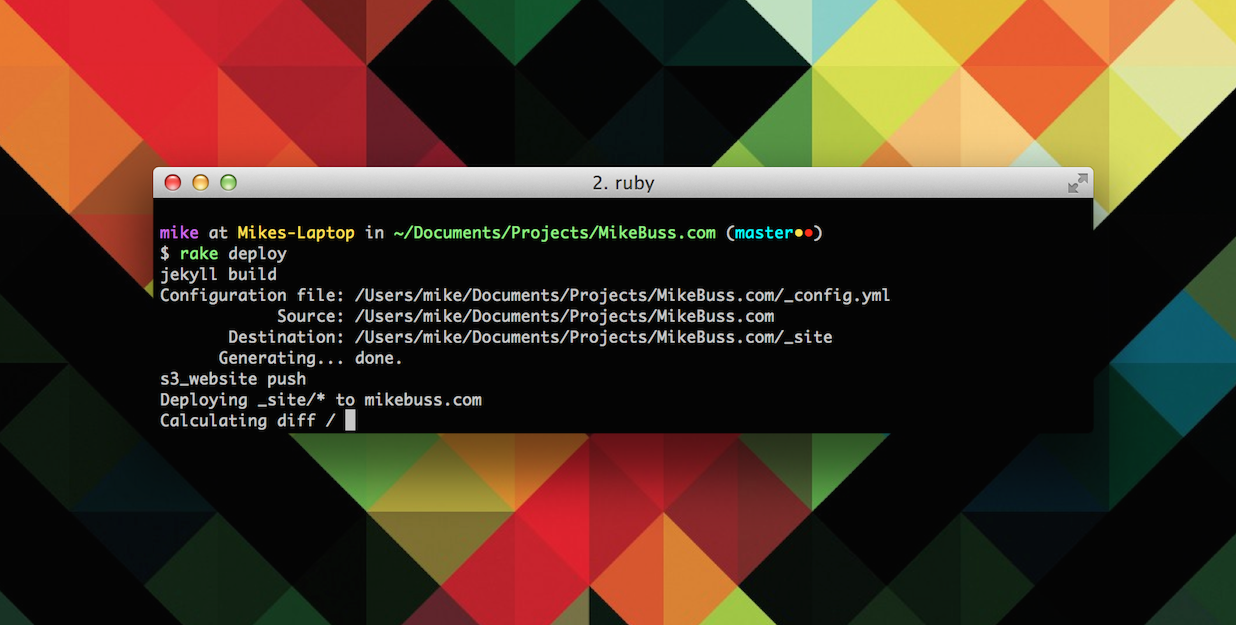 Every developer can benefit from using the command line. Whether you use it to bounce between projects or create complex scripts, getting familiar with the command line can drastically improve your workflow.

In this post, we’ll cover some of the great tools available for streamlining your command line experience.

After some experimenting, I’ve found that using a combination of iTerm 2, Zsh, Prezto, Tmux, and Tmuxinator makes for an extremely productive setup. I’ll go over each of these tools and then show how they can be combined to improve your development workflow.

Note: It should go without saying that there’s no right way to work. I prefer to use the command line because I’m a fast typist and hate using the mouse, but everyone has their own opinion. Let me know how you prefer to work!

iTerm 2 is a replacement for the Terminal app that ships with Mac OS X. I use it for these great features:

You can find a complete list of features here.

ZShell (Zsh) is a shell designed for interactive use, and can be used as a powerful command interpreter for shell scripting.

There are very few differences between Bash, the default shell for Mac OS X, and Zsh for the average user. I chose to switch to Zsh because it has some fantastic community-driven frameworks available.

Here are some of the advantages of Zsh when compared to Bash:

Let’s take a look at two of the most popular Zsh frameworks: oh-my-zsh and prezto.

Oh-my-zsh is the first framework we’ll look at. With over 120 optional plugins and 120 themes, oh-my-zsh is the largest Zsh framework. After using it for several years, I’ve found it to be very stable and easy to use.

Note: I’ve since switched to Prezto, but oh-my-zsh is a fantastic framework worth mentioning. Read more about how to decide between the two frameworks by scrolling down to the Choosing Between Oh-my-zsh and Prezto section.

The real power behind these frameworks comes from their plugins. When I was using oh-my-zsh, here were the plugins I used the most:

A full list of plugins can be found here.

If you’d like to go ahead and install oh-my-zsh, the official instructions can be found on their GitHub repository. Before you do, though, you should see if Prezto is better suited for your needs.

From the official Prezto repository:

Prezto is a fork of oh-my-zsh that has been rewritten for speed. After using it for the past several months, I’ve found it’s much faster than my oh-my-zsh setup.

Prezto also has themes and a fantastic selection of plugins (although Prezto calls them modules). Here are the modules I use the most:

The cover image for this post uses the steeef theme for Prezto. More info on customizing your Prezto prompt here!

Choosing Between Oh-my-zsh and Prezto

Oh-my-zsh has a much larger selection of themes and plugins, but Prezto’s tab completion is noticeably faster.

If you have a plugin you’d really miss by switching to Prezto, I’d suggest sticking with oh-my-zsh. Otherwise, the speed increase is well worth the switch.

After using tmux for over a year, I can’t imagine life without it. After memorizing a few keystrokes, it’s extremely easy to switch between projects.

The website Giant Robots Smashing Into Other Giant Robots has a great crash course on tmux. It’s definitely worth a read!

Tmux can be installed with HomeBrew using brew install tmux.

Tmuxinator is a Ruby gem that makes creating and managing complex tmux sessions a breeze.

Wemux adds powerful, easy to use multi-user terminal multiplexing. If you’ve ever wanted to share your terminal with someone else, this is a great way to do it. It has several modes that allow for different access privileges.

Putting It All Together

So you’ve got all these great tools installed. Now what? Let’s go over how you can work them into your workflow.

Both frameworks have themes that let you put git information in your prompt.

Here’s an example of a great oh-my-zsh prompt:

Just from looking at the prompt, you can tell:

Having all of this information available every time you enter your project’s directory is invaluable. The less typing you have to do, the better!

There are some great command line tools out there for iOS developers. Nomad-CLI is a great example, with 5 tools all geared towards iOS development and testing.

Let’s go over one way to work with long-running processes using tmux. First, make sure you have tmux installed. Using HomeBrew, it’s as simple as running:

Next, let’s install Shenzhen, a tool for creating and distributing an IPA for your iOS app.

Now that we have both tools installed, go ahead and start a new tmux session called ‘deploy’:

Navigate to your iOS project’s directory and build your project using this command:

If this works, you should see your IPA file in the same directory. Now for the fun part!

You can distribute your app through TestFlight, HockeyApp, or FTP using Shenzhen, so let’s give that a try. If you have one of these distribution methods, feel free to follow along. If not, just take my word that this command works!

Depending on the size of your app and your connection, uploading the IPA can take a considerable amount of time. This is where tmux comes in.

While the IPA is uploading, try detaching your session by hitting CTRL+b and then d with the window in focus. You should return to the prompt you saw before running the tmux new-session command.

If we’re back to the original prompt, where did the upload go? Well, detached tmux sessions continue to run in the background. Let’s go back to our long-running upload process by reattaching the session:

And voilà! You’re back to the upload process.

Tmux is a great way to switch back and forth between workspaces. Using it to put a process in the background and check back on it’s process periodically is just one small example of what tmux is capable of - this example is barely scratching the tip of the iceberg.

Note: Checking back on a long-running process is fine, but if you’d like to receive a push notification when it finishes, check out Push Notifications from the Command Line Using Pushover. The tutorial works even better when you incorporate tmux into the mix.

Getting familiar with the command line can drastically improve your workflow. If you prefer using the keyboard over the mouse, you should try out some of these great tools.

Have a suggestion for a tool? Want to share your workflow? Feel free to send me a line!

The tools I use every day.

How I used an Arduino, servo, and keepsake box to make a birthday gift.